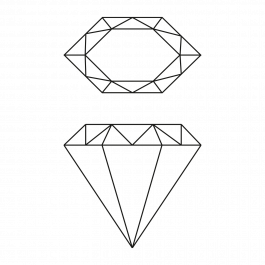 Objects made of glass were often used as ornaments, as jewellery for humans. They were either worn directly on the body or attached to textiles. Small round or rod-shaped glass beads in diverse colours were strung on horsehair and have been known since antiquity as components of bracelets, necklaces or rings. In the early modern period, glass beads were mass-produced goods that became important as a means of payment in the slave trade, in particular when in contact with native Africans and Americans. In the eighteenth century, imitation gems made of lead glass were invented in France and were called rhinestones after their inventor. Buttons were also made of glass as well as of bone and horn.