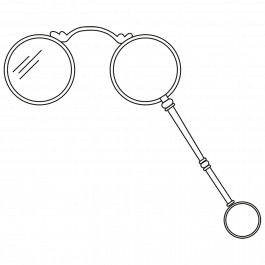 Vision belongs to the central senses of the human being. The loss of vision due to age-related farsightedness or eye diseases leads to increasing dependence on other people and might lead to disability and to the incapacity to work and, consequently, to extreme poverty. Defective vision was associated with the colour of the eyes: “Personen, welche schwarze Augen haben, brauchen gemeiniglich früher Brillen, als diejenigen, welche blaue oder graue haben. Jene werden nicht leicht kurzsichtig.” (People with black eyes generally need glasses earlier than those with blue or grey eyes. They do not easily become nearsighted; Krünitz 1775, vol. 6, 707). Glasses, at first made from cut beryl then from cut glass lenses, can be found in Europe since the fourteenth century. Subsequently, they led to a partial compensation for ametropia. These visual aids were always intended for temporary use only and had to be moved over the text with one hand or held in front of the eyes. Magnifying glasses and microscopes were used to enlarge small or diminutive things.