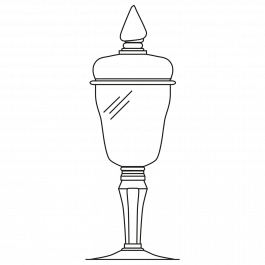 Some glass objects were only rarely used; instead they were exhibited for inspection. Therefore, the focus was not on their actual function (e.g. as vessels), but on their aesthetic design and on their connotations. They were regarded as precious luxury objects, they were part of the family treasure or a collection, they were regarded as magically or religiously “charged” objects or were used as ritual objects on particular occasions alone. Such objects thus carry information about their owners and are called representative objects.