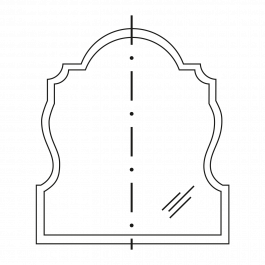 To be reflected in the mirror and to look at one’s own face is one of man’s primeval habits. Before glass mirrors were used, people looked at themselves in smooth water surfaces and polished metal discs. The glass panes produced by the glazier in the early modern period were sold to the mirror maker who first cut them to size, rubbed them with sand and then polished them with tin ash and felt. Then a thin sheet of tin the size of a mirror glass was covered with a layer of mercury and, finally, the glass pane was placed on top and agitated until the mercury was evenly distributed all over the glass. During the drying process, all three layers became firmly connected and the finished mirror glass could now be covered with a wooden frame. Only this type of mirror rendered possible a relatively clear mirror image which was however still different from the quality of modern mirrors. In early modern times, mirrors were regarded as a means of self-knowledge, but also as a vanity hazard, as a magical gateway to another world or as an oracle. And, same as the hour glass, the mirror was also a symbol of the transience of human life.